Will the Physical Web Take Us “Back to the Future”?

The year 2015 is not entirely what Robert Zemeckis in his epic movie, Back to the Future II, had predicted.

There are no hover boards that float above the roads, there neither are flying cars as a default means of transportation. Although real 2015 has fallen short of such imaginable yet juvenile predictions, not every aspect of Zemeckis’ imagined world is unreal. The foreshadowing details about the telecommunications means in the movie are strikingly similar to today’s reality. Here today, mobile and remote communication has far exceeded being solely in between people.

We now interact with many devices that serve our everyday needs. While, once upon a time, we had to catch a fire to heat our living space, after a while, all we had to do became switching a button. Today, we do not even have to be present in the space, and rather monitor the physical conditions remotely through Internet. Such small interactions define our daily behavior.

That is why the development of the Physical Web matters so much. The Physical Web is an encompassing term that includes the whole of connected devices that will be able to be accessed and monitored by the Web. It aims to offer us the best convenience to manage our daily tasks at using everyday objects that are soon to become smart and remotely controllable. In other words, the Physical Web Project intends to offer us easy management through what we need, without getting overwhelmed amongst the giant network that is popularly called as the Internet of Things.

While some people ask challenging yet constructive questions as how the privacy within the Physical Web will be controlled; others remain abstained from the subject as they worry that the increased accessibility will bring along more spams to our lives. As well-taken and encouraged as such discussions on the subject are, it is essential to maintain them well focused.

The one most important thing to bear in mind is that the Physical Web is yet an open-source project.

Being only at its elementary stage, it likely will evolve and revolve iteratively until it achieves its final state. Even then, the UX and methods of using the Physical Web will be prone to change. So it is very important that the prospective users of IoT who has doubts whether the Physical Web is a solution help it evolve into what their idea of a best solution is.

Here, we try to do our part and put forth just a few of the questions we think are right to ask about the Physical Web Project. As for the answers, exploring them is unto you.

How will the proximate connected objects be accessed?

Actually, the Physical Web project has a default answer to that for now, though it is by no means exempt of being challenged. The most effective proximity enabler today is considered as a BLE (Bluetooth Low Energy) beacon. These 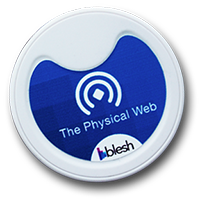 small hardware tags can broadcast a URL through Bluetooth Smart signals. Each Physical Web beacon (UriBeacon) can broadcast a unique URL that leads to the control space on the web for a particular object. Thus all connected objects and their use become accessible to their proximity. There are some valid features of these tags that presently make them the preferred choice for enablers. Their inherent BLE signals are much more accurate than what a   visual tag can offer, such as a QR code. They can offer a truly remote access with their signal range that reaches 50 m (165 ft). They can easily be disguised near or in an object, without interfering with the physical or visual experience of the user.

Physical Web beacons are already available for purchase and play. Find them here.

Why does the era of the IoT take it slow?

True, the term IoT has been used as a hype concept for quite some time, without leading to a disruptive change in behavior now that it even faces the danger of semantic saturation. Is it just a void term that has caused an excitation for a period but is doomed to fade? Or has it already arrived; only we don’t appreciate? The answer may lay somewhere in between. The precursors of a new technological era are certainly present in our lives, but larger impacts are yet to come. Want, Schilit and Jenson, three of the Googlers who are into the Physical Web project, claim an answer in their CMG article, to the question why the universal connectedness of all digital and electrical objects are not already here. According to them, the entities that are best suited to carry the flag for some technological breakthrough keep their data private, for they are proprietary business entities. This is counter to such an open ecosystem as the IoT. That’s probably why the Physical Web project has been launched as an open system.

Why is the Physical Web Project open-sourced?

Part of the reason may be what is mentioned above. Additionally, if the use of the IoT is going to be universal by its definition, it is for our best interest to expand the brainstorming phase out to the world.

Our personal things broadcasting their access in open? An awfully simple and least worrisome example would be the next-door neighbor gaining access to our garage door or kitchen appliances. Privacy and security on small and large scales are sure to need greater measures than what the conventional Web has today.

Will the Internet have enough space?

We try to imagine a future where almost every single object we use can be accessed via a web address. This will make it necessary to enlarge the Web by a few orders of magnitude. The progress is being made to render IPv4 to IPv4 to provide enough space, but is it really the ultimate answer?

What will be the best gateway to access the use of smart objects?

One thing that the movie Back to the Future has implacably missed is the dependency on mobile devices. Today, the average person on an urban street is likely be found bending over a smart phone or any other smart gadget. They are our gateways to the web, to a massive number of actions, such as social networking, banking transactions, browsing, monitoring connected appliances to name a few. If, in the near future, such actions will be multiplied with the arrival of connected objects, we are to accept that we will be even more attached to such gateway tools. In such future, smart phones are unlikely to remain as the best tools we can make.

The point of the Physical Web project is to discuss openly, play and iterate. The point has not been fulfilling a single strategy, nor serving for a single great idea. The aim is, as we dive into the IoT era, cooperatively landing on the best and the most convenient ways that improve people’s lives. The Physical Web may very well offer the best methods. So we all should put our best effort to cultivate it.